Ninety Years Later, Shenandoah Descendents Are Not Forgetting what the NPS and State of Virginia did to their Ancestors.

5/20/18 - WHSV - Monument a step in healing process for valley families - By Johnny Oliver - After homes were burned, only chimneys were left. Because of that, the monument looks like a chimney. 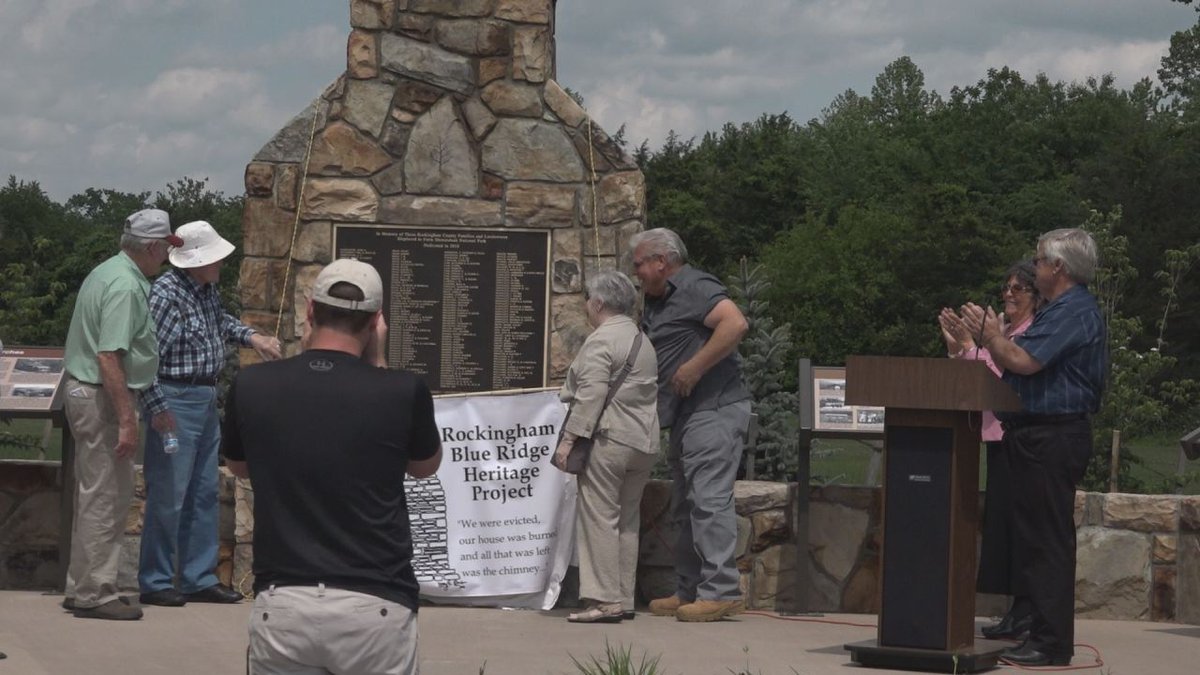 Two Fantastic videos in the link above!

Another monument honoring families displaced by the formation of Shenandoah National Park was unveiled on Sunday afternoon.

The chimney, similar to others erected in areas surrounding the park, contains a plaque with the names of residents who lost their homes.

"It's just a joyous feeling. It's elation," Teresa Kay Lam, a descendant of a displaced family, said. "I cannot really put it into words."

More than 200 people attended the unveiling at the Elkton Area Community Center.

Park Superintendent Douglas Morris says he's sympathetic to the "anger and emotions of the past," but said the park would be vulnerable to even more criticism if it allowed access to the materials without proper safeguards. Over the years, about 10 percent of the collection has been lost or stolen, he said.

"This is a very legitimate concern on [the public's] part," said Morris. "But the greater concern is that that archives be preserved and be used in an appropriate way."

Since the files were declared off-limits, Morris said, staff has made copies of documents for those with simple requests.

Woodward, the owner of a sporting goods store and a former Madison County supervisor, stumbled into the archives roadblock a year ago while researching a book on his and three other mountain families. The author of four Civil War histories believes that park officials want to suppress new narratives on how people were forced off the land to create the park.

Woodward, 40, visited 11 libraries and courthouse record depositories--including the National Archives in College Park--and three historical societies before tackling the Shenandoah archives, where he planned to spend several days browsing through documents and photos of the mountain families.

But, like others before him, he was denied access to the collection until it's in order. When that would be, park cultural resource specialist Reed Engle couldn't say.

Engle has since come under criticism from scholars who say he is using the archives for his articles and books while denying others access. Morris, Engle's boss, said writing books is part of Engle's job and also raises money for the park.

After being denied access, Woodward contacted a lawyer, who suggested he file a Freedom of Information request with the park. The reply was swift: He was told he could have what he wanted from the archive, but it would cost him $92,000.

Months of wrangling followed. Eventually, the park agreed to provide 88 pages, a fraction of what Woodward sought. He's now redrafting his request.

Standing behind the counter of his cluttered shop here, where hunting knives and fishing lures are displayed alongside the violins and handmade dulcimers that are his passion, Woodward walks a visitor through the thick file he keeps on his dealings with park officials. Every phone conversation. Every letter. Every thought, noted in his neat script.

"The park wants to wipe out the memory of these people," he said in his heavy Virginia twang. "They're afraid I'll shed a bad light on the way people were treated."

Martin-Perdue agrees: "I think the Park Service does have things to fear from tales . . . about how people were treated. A first-person story is always more powerful."

Email us with questions or comments about this web site.
All pages on this website are ©1999-2006, American Land Rights Association. Permission is granted to use any and all information herein, as long as credit is given to ALRA.